What's next for Ghislaine Maxwell – and will she cooperate with prosecutors? 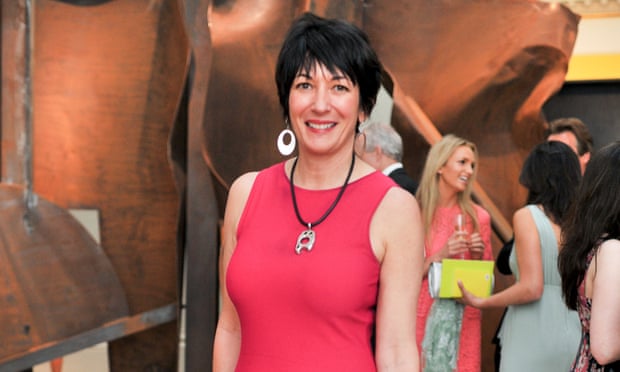 While Ghislaine Maxwell’s arrest Thursday in relation to confidant Jeffrey Epstein’s sex crimes answered some questions about her life – revealing, for example, that she hid at a sprawling, million-dollar New Hampshire estate, where she was picked up in a morning raid – still more questions arose about what’s next for the mysterious British socialite.
Prince Andrew under pressure after arrest of Ghislaine Maxwell
Read more
As she sits in custody, with plans by federal law enforcement to move her from New England to New York, at the top of many minds was whether Maxwell – long accused of grooming underage victims for Epstein – will cooperate with prosecutors.
Despite Epstein’s death in a jail cell in Manhattan last August while awaiting trial, the authorities continued to investigate his crimes and other people in his network.
Maxwell, 58, was charged on Thursday in a 17-page indictment with allegedly enticing a minor to travel to engage in criminal sexual activity, transporting a minor with the intent to engage in criminal sexual activity, conspiracy to commit both of those crimes, and perjury related to a sworn deposition. If convicted, she faces up to 35 years in federal prison.
At a press conference in Manhattan early Thursday afternoon, federal prosecutor Audrey Strauss, acting US attorney for the southern district of New York, accused Maxwell of lying about allegations that she conspired with Epstein and also was directly responsible for some of the sexual abuse herself because the truth was “almost unspeakable”.
Then Strauss was asked whether the perjury charge could impact Maxwell’s potential value if she were to cooperate.
“This sometimes happens where there are perjury charges – and people can go on from there and become cooperators,” Strauss said.
She continued: “So I’m not concerned about that.” And if Maxwell were to become a cooperator, Strauss said of the perjury charge: “I think we could deal with that.”
At this point, any talk of Maxwell’s cooperation, typically a plea deal in return for information about other perpetrators, remains hypothetical.
And it’s difficult to say how any potential cooperation would play out. Following Epstein’s death, many now perceive the wealthy socialite as the ringleader in his abuse conspiracy.
Ghislaine Maxwell arrest sends tremors through Epstein’s celebrity circle
Read more
It’s more common for cooperators to be lower-level participants in criminal activity, not ringleaders, the idea being that their cooperation would implicate the higher-level offenders, now those lower down a crooked hierarchy.
David Weinstein, a former federal prosecutor who now handles white-collar criminal defense at Hinshaw & Culbertson, pointed to the potential lengthy sentence as a possible incentive to cooperate. If Maxwell pleaded guilty rather than going on trial, she could face less time.
“They will use all of this to pressure her into cooperating against the other ‘known and unknown co-conspirators’ mentioned in counts one and three [of the indictment],” Weinstein told the Guardian in an email.
“However, keep in mind that at this point, with Epstein dead, she is the kingpin of the ‘organization’,” Weinstein said of how prosecutors likely perceive Maxwell. “If she cooperates, she would be cooperating down. Those co-conspirators would have to be high profile individuals to warrant [prosecutors] accepting her cooperation.”
Britain’s The Sun newspaper on Friday reported that a former associate of Epstein, Steven Hoffenberg, who spent 20 years in prison for a financial pyramid, or Ponzi, scheme, predicted that Maxwell will quickly “crack” in custody and cooperate.
Julie Rendelman, a New York criminal defense lawyer who formerly worked as a prosecutor, said that cooperation wasn’t off the table despite Maxwell’s potential alleged high rank.
“Could she cooperate? Sure, she could cooperate, even though many view her at this point, without Epstein, as being the highest in the chain,” Rendelman said. Adding, however, “we don’t know for sure she is”.
But cooperation wouldn’t necessarily be a “get out of jail free card, but may instead get her leniency when it comes to sentencing in the end,” Rendelman said.
Asked whether he had anything to say about Maxwell’s arrest, or the cooperation question, her lawyer, Lawrence Vogelman, said in an e-mail: “Sorry. No comment.” Maxwell has long maintained that she did not engage in any wrongdoing.
Daniel Alonso, a former federal prosecutor who’s a partner at Buckley LLP’s New York City office, said: “Clearly, the top of the pyramid in this case was Epstein, and he’s gone, so it all depends on the government’s perception on the relative value of its own mission, of prosecuting other people that they might not otherwise be able to convict without her testimony.”
Even if the FBI concluded that the people she can cooperate against are somehow less culpable, that wouldn’t mean that they wouldn’t find value in her cooperation, Alonso pointed out.
“There are many instances where the government has used so-called higher level people against so-called lower level people,” he continued. “It’s not the norm, it’s much more common to cooperate people ‘up’, but it’s not unheard of.”
He also said that cooperators can still be effective, even if they’re implicated in perjury.
“There’s this sort of misconception that if somebody has a perjury conviction, that they’re never useful as a witness ever again. That’s not true,” he said. “The question is not: ‘Did they lie the first time?’ The question is whether they’re telling the truth now.”
bradford nh Ghislaine Maxwell Jeffrey Epstein Prince Andrew